We The North Goes Global: How the Raptors NBA Championship Run Is Impacting Toronto

Home/Uncategorized/Text/We The North Goes Global: How the Raptors NBA Championship Run Is Impacting Toronto
Previous Next

We The North Goes Global: How the Raptors NBA Championship Run Is Impacting Toronto

While basketball has historically gone unnoticed in Canada, it’s difficult to go anywhere right now without hearing some form of pride in Canada’s sole NBA team – the Toronto Raptors. This is especially true if you are living in Toronto. “We the North” pride has swelled to its highest peak, as the Raptors have made their way to the NBA Finals for the first time in franchise history. Whether you’re watching at home, at a bar, in “Jurassic Park,” or have been lucky enough to score tickets to a game at Scotiabank Arena, the Raptors are at the forefront of Toronto’s collective mind right now. This level of enthusiasm has affected the city in a variety of ways that are sure to be felt both in the short and long term. Here are just a few of the ways the Raptors’ success has impacted Toronto as the team heads into Game 4 of the NBA Finals.

The most notable impact the NBA Finals have had on Toronto can be felt within the hospitality and tourism industries. Hotel prices have skyrocketed, and people from around North America have begun to flock to the city to take in one of the final games. Whether they’ve paid the hefty price to secure a ticket inside Scotiabank Arena or they’re taking in the sights from outside the arena in Jurassic Park — or another similar viewing party across the city — fans of the sport are doing whatever they can to ensure they have a place within this historic moment. Tourism Toronto has said that the impact that this playoff run will have on the city will produce both short- and long-term effects. While people will travel to Toronto in the near future for the games themselves, the Raptors’ success will give Toronto a level of exposure in the United States that doesn’t often happen. In the long run, some experts have predicted that the exposure Toronto is receiving right now across North America could result in up to $1 billion for the city over a 10-year period.

“Any time you have continent-wide pop culture attention on the city, that helps build more interest and awareness and demand for Toronto,” said Andrew Weir, Vice President of Tourism Toronto.

While the economic impact that this playoff run is having on local businesses is harder to measure, it’s undeniable that bars and restaurants across the city are thriving right now. Walk through any neighbourhood in Toronto on game night and you will find bars and pubs filled with eager fans looking to enjoy the game in a communal fashion. According to Moneris, a credit and debit processing firm, “transactions at bars in Ontario were up by 23% during Game 6 of the Eastern Conference Finals between the Raptors and the Milwaukee Bucks.” That percentage increased to 28 across the GTA and was as high as a 76% increase in Toronto at 11pm when the game ended and fans packed bars to celebrate the win. These numbers aren’t necessarily surprising, as similar spikes have occurred during playoff pushes before. Similar data have also shown how events such as this can economically impact a city, with reports showing that Toronto brought in an estimated $100 million USD from similar increased revenue streams when it hosted the NBA All-Star Game in 2016.

It’s not surprising that fans are seeking out such viewing opportunities, given the fact that most won’t be able to find a way into the actual arena to watch the game themselves.

As with most playoff games in the Big Four leagues, ticket prices have reached astronomical levels. The cheapest face-value ticket for Game 1 hovered around the $800 mark, and fluctuated thanks to Ticketmaster’s implementation of their “dynamic pricing” tool (which is supposedly used in high-profile events to curb scalpers and ticket bots). Still, these tickets sold out instantaneously. On the secondary market, the cheapest ticket for Game 1 was $796 USD (approximately $1100 CAD), making it the “most in demand Finals game ever tracked” as per Ticket IQ’s statistics.

It makes sense that Raptors fans are eager to see their team play a Championship game in the flesh, as the city hasn’t had a major sports team in their respective league finals since the Toronto Blue Jays in 1993. Of course, with prices so high, the parties seeing the biggest economic impact are the Raptors themselves and their owners, Maple Leaf Sports and Entertainment.

Statistically, making it to the NBA Finals nearly doubles a team’s merchandising sales, with an average revenue bump of 191%. This has certainly been the case for the Raptors, who are now ranked as the most valuable sports franchise in Canada with an estimated worth of $1.8 billion USD. The team has come a long way and has nearly doubled their monetary worth since 2014. Thankfully for the city of Toronto, the team has been eager to give back to the city that made them.

There is an undeniable buzz circulating throughout Toronto right now, and arguably through the whole country. While Toronto has established its iconic “Jurassic Park” outside of Scotiabank Arena, large viewing parties have popped up all across the GTA and from coast to coast across the country. The energy on game night is electric, and the Raptors are doing whatever they can to capitalize on that buzz.

Last week, a few of the Raptors along with NBA commissioner Adam Silver and representatives for NBA Cares — the league’s social responsibility initiative — stopped by Jimmie Simpson Recreation Center in the east end of Toronto to launch a brand new “Learn and Play Center”.

Kyle Lowry, Pascal Siakam, Marc Gasol and Danny Green arrived at Jimmie Simpson to a great deal of fanfare as the neighbourhood descended upon the rec center in hopes of catching a glimpse of the superstars.

The new center is described as a space for “sportsmanship, respect, teamwork and more”, with the NBA donating approximately $75,000 to give the facility a decor refresh along with new equipment, furnishings and tools for learning. 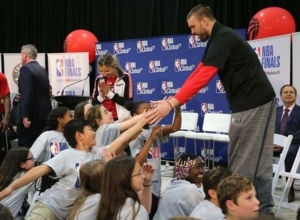 While the Raptors look for ways to give back to communities in Toronto, judging by the post-game celebrations alone, the team’s historic championship run has united the city in a way that hasn’t been felt in decades.

Regardless of what happens in the final games, it’s clear that the Toronto Raptors have cemented their status as a formidable team within the NBA. In doing so, they have shone a light on Toronto that will produce an economic boost both in the coming weeks and in the years to come. Speaking with CTV, our Director, Layth Gafoor, echoed that sentiment, saying: “Whether they win or not, they’ve already won because they’ve changed the culture of how pro sports teams are dealt with in Toronto. It’s changed everything.”

Although most fans won’t have the opportunity to experience any of the games from within Scotiabank Arena, the entire city has found ways to come together and celebrate their beloved team. At this point in Toronto, the Raptors have created such a fever that the question isn’t “are you watching?” but rather “where are you watching?”. The impact of the Raptors’ race towards the NBA championship can be felt in an abundance of ways throughout the city, and that feeling is sure to linger for some time even after the final game is played.

About the Author: josh